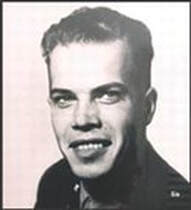 On April 16, 1945, Gray was a member of the 391st Fighter Squadron, 366th Fighter Group and was the pilot of a single seat P-47D aircraft on a dive-bombing mission in the vicinity of Lindau, Sachsen-Anhalt, Germany. His flight leader reported that after Gray strafed a truck, the left wing of his aircraft dipped into the trees, causing it to crash. .

During investigations conducted in the Lindau area during a 2012 field investigation, Joint POW/MIA Accounting Command (now DPAA) historians received leads about Gray’s loss. Based on information gathered during eyewitness interviews and local research, investigators recommended excavation of the Lindau site for the possible remains of Gray.

In April 2016, a DPAA recovery team excavated the crash site and recovered possible human remains. The remains were sent to the DPAA laboratory for analysis. Gray's body was identified & laid to rest July 14, 2017, in Kent Washington, at Tahoma National Cemetery.

Laboratory analysis and circumstantial evidence were used in the identification of his remains.