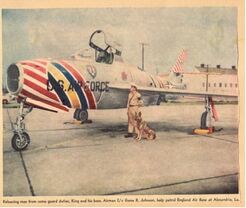 ​
If you can provide information regarding any of the following requests please click
>>> WEB MASTER  and enter the applicable information.  Thank you.


***** Seeking to interview F-4 Pilots and RIO's
In connection with research for a novel about a Phantom pilot serving in Vietnam, I would like to interview F-4 pilots or RIOs about several practical matters involving that aircraft. If you would like to assist by being interviewed I can be reached at 912 771 9119, or via an email to whalerock@smith-family.com     Thank you, J.R. Smith, Saint Simons Island, Georgia.

​​​***** Does anyone know why two F-4 wing tanks were dropped,  on Alaska's North slope, in 1966?
I am a professional archaeologist who works in northern Alaska. In 2007 and 2008 we found two external wing tanks from an F-4 on Alaska's North Slope, and I am trying to figure out the reason they are there. The 1965 deployment of eighteen F-4Cs of the 389th TFS provides a possible explanation for the wing tanks. The wing tanks, made by Sergeant-Fletcher, are an early model (part no. 26-370-4843, one is serial no. 1065). A declassified CORONA spy satellite image that shows them present which was taken on 14-AUG-1966 - four years before the F-4Es of the 43rd TFS arrived in Alaska. I do not know if there was a final report of the deployment to Alaska that would have been written, or what kinds of other records might exist for that deployment. I am grateful for any help you can offer in solving this puzzle. Thanks, -Rick

​​​​***** Looking for William "Billy" Mitchell to obtain his eye-witness recollection of downing of an F-4 by friendly fire.
I am compilng a story for our 12 TFW Assoc. newsletter regarding one of our F-4s that was shot down by a 105mm howitzer round, a friendly fire incident. An army Captain Billy Mitchell was in a helicopter with an army Brid/General observing the LZ prep by the Air Force. By mistake the army failed to call off the artillery pounding the LZ and a round struck an F-4--did not explode but destroyed the Phantom. The F4 rolled when the GIB ejected at 30-45 degrees and the Aircraft Commander ejected at 90 to 120 degrees downwards and was killed. They were at approximately 1,000 feet altitude on the bombing approach.  The GIB survivor says Billy Mitchell was a captain in the army and transferred to USAF, became a pilot and was stationed at Da Nang.  I wish to obtain his eye-witness recollection of the incident.
Norman Malayney, 12 TFW Association

​​***** Looking for anyone who knew Colonel Kelly F. Cook
I'm looking for anybody who might have known or served with my father, Colonel Kelly. F. Cook. He served with the 366th and his F-4 went down in November 1967. He remains an MIA even though he was declared officially deceased in 1978. I'd appreciate the opportunity to speak with anybody who served with him or remembers him. Thanks for your time and attention, and thanks for your service.
Respectfully,  Brian Kelly Cook

​***** Seeking General Walter Kross or a (last name) Farmer
My name is Jett Miller, my grandfather, Maj. Aubrey Gene Stowers, was a Da Nang Gunfighter from late 1967 to early 1968 and was KIA in Laos, remains were never found. Therefore, my mission is to come in contact with his fellow pilots listed in his flight diary—in which I possess—and see if they happen to have a story about my grandfather and/or their missions over South East Asia. Before every mission, he listed the air crewmen and weapon load-outs. I would greatly appreciate if you could help me try and find their contact information. My grandfather was in the 390/366 fighter squadron/wing. It is tough because I only have the last names and cannot seem to find a good database. If you cannot help, no worries at all.   Thank you for your time.

**** Seeking information regarding the proper spelling of names for two who served in the 366 MMS, at Da Nang.
My names is Ken Frick, I'm writing a piece and am looking for the proper spelling of one man who was in the 366 MMS in 1971 and 72. I'm not trying to contact him, only get his name spelled correctly. He is Rich Marchese, or Marchase, not certain. This will probably never see the light of day but I'd rather this be correct. Maybe you can help, or not. But thanks. The second request is a continuation of my first, only the proper spelling of a sergeant in the MMS whose name is I believe Tim Mingledorf. The first name may be incorrect. It's been a long time. I don't plan to approach him. Thanks again.  Ken

***** Seeking official 390 TFS Photo from Fall of 1967
I am looking for an official squadron photo--where the pilots all stand in front of the Commander's F-4. Specifically, I am looking for the 390th TFS photo taken in the Fall of 1967, when Lt Col Fred C. Haeffner was the Squadron Commander--and he would be front and center in the photo.

***** Seeking info regarding 480th TFS aircraft downed on 4/22/69
I am attempting to assist in contacting the lead or wingman aircrew of the F-4 that I understand was in formation with Vincent Scott’s and Walter S. Van Ckeave’s F-4 on 4/22/69 in Laos when they were presumably shot down. My friend, John DuBose, is interested in speaking with either of the accompanying F-4 aircrew, if feasible, to learn more about the circumstances of the crash. If you could provide any assistance, I would be most appreciative. ​H. G. “Don” Mercer Virginia Beach, VA

***** Gerald (Jerry) Riley is seeking contact with aircrew present when his F-4 was hit,  in 1972, during the siege of An Loc.
On or about 15 Apr 1972 I led a flight of two F4s from Da Nang to An Loc during the siege. Immediately after rolling in on a 51.cal site, I was hit in the centerline fuel tank that exploded and sent the plane tumbling out of control. Thank God we recovered,  jettisoned the ordnance and made it to Bien Hoa. Both I and my navigator sustained severe whiplashes. Mine resulted in a fractured cervical vertebrae. If my Captain wingman, his back seater or my back seater get this message please contact me ASAP. I'm trying to get some VA disability.
Your brother, Jerry (Retired Inactive Reserve Captain). I would love to hear from any of you all.

​​
​***** Seeking photo of Colonel Daniels' F-84F​
​Sir,  I am an aviation artist, currently working on a series of F-84F profiles, and I am aware of the highly colored 366th Commander's machine, based at England AFB in the 1950s. Unfortunately, I only have one reference photograph from which to work so, for example, I can not confirm the serial/buzz number of the aircraft. Without details such as these, I am unable to complete the artwork. I wonder whether you are you able to point me to a contact or reference source that could help me?  Warmest regards  Andy Godfrey  Artist, the Teasel Studio.

​
​**** Seeking information regarding F-4E #66-0294
Hello My name is Bill Sobeck, AL Post 109, in AZ.  I am the Crew Chief on F-4E 66-0294. This a/c was at Da Nang  in Aug of 1970 with the 366th TFW. Was later moved to the 432nd TRW at Udorn in 1972. I am looking for any pictures or info about a/c.  Any info would be great. I live in the Tucson area and have taken lots of Boneyard.  I post my pic at on Flickr. This link is for the album of just F-4s in the boneyard https://flic.kr/s/aHsjDRwpur . I do not make any money on pic and downloads are free, do not join Flickr to download.  I was at Udorn in late Oct of 72 and didn’t  take to many pictures.  This link is pic of 66-0294 at Post 109 https://flic.kr/s/aHsjsDv1wX  Aircraft came from the boneyard with Edwards white on it. If you can use any pic please do so, free.  Trying to get better history of 294. Thanks for any info. Bill Sobeck, Retired USAF - If you have information or pictures please email me: CactusBill@outlook.com Thanks for any info.  Bill Sobeck, Retired USAF

**** Seeking information regarding Charles E. Conn
My name is Jeremiah Conn and I am the Son of the late Charles E. Conn who served with the 366th in Vietnam. I am looking for anyone who may have known him and would like to share a story. I appreciate your time and any help you can lend.

**** Seeking information regarding Captain James Ketterer
​Captain James Ketterer was a member of the 389th Tactical Fighter Squadron in early 1968, during which time it was a part of the 366th Tactical Fighter Wing. Captain Ketterer was on a mission on January 20th, 1968, over Quang Binh Province when his aircraft was hit by enemy fire and shot down. Captain Tilden Holley was also on this mission, and both men were listed as missing in action. Looking for anyone who might have known Captain Ketterer and would be willing to share any information they have about him..