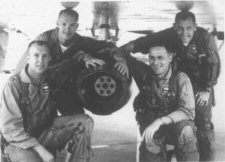 "Over the months of air-to-air combat, many MiG's escaped destruction by the F-4's simply because there was a deficiency in the Phantom's short-range kill capability. At medium range, they could use the infrared heat-seeking AIM-9 Sidewinder; at long range, they had the radar beam-riding AIM-7 Sparrow. But aircrews were unable to maneuver their F-4's to fire these missiles at short range, and many of the MiG's escaped. In May 1967, however, the F-4's began carrying the SUU-16 gun pods to complement the missiles, and immediately the short-range deficiency was corrected.

"The first MIG's fell prey to this weapon on 14 May, when F-4C aircrews of the 366th TFW destroyed three MIG-17's; two of them were shot down by the SUU-16. An F-4 flight trailed an F-105 strike force attacking the Ha Dong army barracks and supply depot; another F-4 flight was spaced between the F-105 flights. Both of the Phantom flights were providing MIGCAP. The first flight encountered 16 MiG-17's, destroying two of them; the other flight encountered 10 MIG-17's and destroyed one.

"The first flight, lead by Maj. James A. Hargrove, Jr., and 1st Lt. Stephen H. DeMuth, heard MIG warnings after it departed its refueling point. The lead F-105 called bogies at 9 o'clock, and Hargrove spotted two F-105's leaving the target area. Four MIG-17's in two elements were in hot pursuit. Dropping their fuel tanks, Hargrove and his wingman headed for one element while aircraft 3 and 4 attacked the second. For the next 20 minutes the scene was a beehive of activity as the F-4's took on in combat 7 of the 16 MIG'S. At least one SAM was fired at the U.S. flight during the air battle.

"Hargrove's victory came after 5 minutes of battle, during which he fired Sidewinders and Sparrows against three other MIG-17's. He missed all three. On his fourth engagement, he elected to use the SUU-16 gun pod. According to Hargrove:

"The MIG-17 was in a right-descending turn when we attacked from a 20 degree angle off its tail. I opened fire at approximately 2000 feet from the MIG and continued firing until, at approximately 300 feet, flame erupted from the top of the MIG fuselage. Almost immediately thereafter the MIG exploded.... I broke left to avoid debris, then reversed to the right and saw the MIG, in two sections, falling vertically toward the ground. Due to other MIG's attacking our aircraft we were forced to exit the immediate area before the MIG struck the ground.

"Three MIG-17's were sighted at 9 o'clock low in a left turn. I barrel rolled to the right and rolled in behind the trailing MIG. He tightened up his left turn, then reversed hard to the right as I approached gun range. I followed the MIG through the turn reversal, pulled lead, and fired a 2 1/2 second burst from my 20-mm cannon. Flames immediately erupted from his right wing root and extended past the tailpipe. As I yoyoed high the MIG rolled out to wing level in a slight descent and I observed fire coming from the left fuselage area. I initiated a follow-up attack; however, before I could fire, the MIG burst into flames from the cockpit aft and immediately pitched over and dived vertically into the very low overcast. The tops of the clouds were approximately 4,000 feet MSL (Mean Sea Level) with the higher mountains protruding slightly above them. The attitude of the aircraft and proximity to the ground would have precluded a successful recovery. No ejection was observed.

"The kills with the gun mode could not have been made with a missile," Craig later commented. Both MIG's were picked off from incomplete Wagon Wheel formations.

“MIG's encountered by the second flight also used the same circular tactics. Maj. Samuel O. Bakke and Capt. Robert W. Lambert, flying in the lead aircraft, got their victory at the same time that Craig and Talley made their kill. Unlike Hargrove's aircraft, Bakke's phantom was not equipped with SUU-16 gun pods. All of the aircrews were in agreement at the 20-mm guns "would have been much more effective against the MIG-17's than of the missiles."

“The strike aircraft and Hargrove had alerted Bakke's flight about the MIG'S. Bakke explains how he and his flight took the offensive:

"I observed several enemy aircraft at my 11 o'clock low position. The flight attacked these MIG'S, diving from 17,000 feet MSL to the enemy's altitude of approximately 6,000 feet MSL. My first engagement ... was unsuccessful due to the two Sidewinder missiles not guiding to the target. An attack was commenced on another MIG-17 in the area and discontinued because of the target outmaneuvering the attacker. After a high-speed yo-yo to an altitude of approximately 10,000 feet MSL I noticed two MiG's at my 10 o'clock low position.

“Bakke and his wingman then attacked the enemy fighters by rolling outside in the direction of turn of the enemy. "As this roll commenced I saw a MIG-17 explode in flames and start spinning in the vertical nose-down attitude towards the ground," he recalled.

"Continuing the attack on the two MIG-17's, Bakke chose one on the outside of his left turn and called the pilot to try for a radar lock-on. "My pilot called that he had a radar lock-on, and I squeezed the trigger with the MIG-17 inside my gunsight reticule. The AIM-7 would not fire," Bakke complained. His radar scope showed a "break-X' display, indicating that he was too close to the target for a successful Sparrow launch. Bakke then realized that with the interlock switch in the "in" position, the AIM-7 would not fire unless all missile firing parameters were satisfied. He continues his account:

"I retarded my throttles to idle and gained proper range separation from the target. I again glanced at my radar scope and observed an attack display with the steering dot in the center of the allowable steering error (ASE) circle. The ASE circle was very small, indicating I was at minimum Sparrow missile range. I fired two Sparrow missiles while pursuing the target in a left turn. One missile did not guide and the other "homed in" on the target, causing an explosion and fire in the right aft wing root of the MIG-17.

"The MiG pitched up to a 30' nose-high attitude at approximately 5,000-6,000 feet altitude MSL and entered the clouds in a stalled condition. The average terrain in the battle area is from 1,000 to 3,000 feet with some mountain peaks of 4,500 feet present. I did not observe a parachute from the burning MIG.

"During this engagement I noticed another MIG-17, on fire from the under fuselage, pass below me and to my right. I was in a left turn and about to fire at the time. Another flight of F-4C's was in the area and engaged in aerial combat at the same time. The two MIG-17's seen in flames while I was engaged in my successful attack were probably destroyed by Craig's flight."