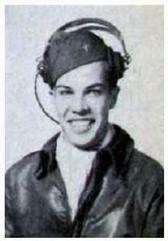 First Lt. William "Bill" James Gray, Jr, 21, was killed in action at 1:00 PM on April 16, 1945, while serving his country in Lindau, Sachsen- Anhalt, Germany.
Bill was born in Seattle, Washington, on October 27, 1923. He graduated in 1940 at the age of 16 from Franklin High School at the top of his class. He then attended the University of Washington before entering Aviation Cadet Training.
Like many young men and women of his generation, Bill jumped to defend our country, enlisting along with his good buddy and future brother-in-law, James I. Louvier. In September of 1942, he joined the US Army Air Forces, and was commissioned in March of 1944.
Bill fought in the European Theater of Operations, seeing action during the Battle of the Bulge in Belgium. He piloted a single seat Republic P-47 Thunderbolt Fighter- Bomber as part of the 391st Fighter Squadron, 366th Fighter Group of the Ninth Air Force and was a recipient of the following: Distinguished Flying Cross, Air Medal with Numeral 6 Device, American Campaign Medal, WWII Victory Medal, and Purple Heart.
Bill died just three weeks prior to the end of the WWII conflict. While strafing a truck, his aircraft sustained damage and crashed, killing him upon impact. In October of 1948, the crash site was located, but search of the area was not possible due to Soviet Army occupation. Sixty-four years later, in July of 2012, another investigation took place. As a result of this search, which took place from April 10 - 25 of 2016, the crash site was excavated, and Bill's remains were found. DNA samples were taken from Bill and surviving family members to confirm his identity. Now, seventy-two years later, following the crash, he will finally be laid to rest.
He was lovingly remembered by his parents, William J. Gray, Sr. and Elizabeth (Cooper) Gray; his three sisters, E. Jeanne Louvier, Donna Schaller, and Diane Clawson; brother, Dean Gray; his grandmother, Elsie J. Cooper; and numerous aunts and uncles.
A graveside service will be held on Friday, July 14, 2017, at 2:30 at Tahoma National Cemetery in Kent, WA, with the Rev. Tom Bradshaw officiating. Full military honors and a flyover by the squadron he once flew with have been planned in his remembrance.