Things were getting pretty hot in northern South Vietnam during the spring 1972 North Vietnamese Army invasions across the DMZ. As a result, a somewhat unique mission for one F-4E Phantom, little known until this painting, was born of opportunity and circumstance, and not a little initiative on one officer's part. At the time of this bold enemy offensive, the Da Nang based 366th Tactical Fighter Wing Gunfighters was the last F-4 Wing in South Vietnam, and very close to the DMZ. These factors inspired Gunfighters Director of Operations Colonel J. D. Pewitt to conceive the idea of operating one of the Wings F-4Es as a free-roaming and heavily armed strike-recce aircraft to help stem the fast-moving enemy tide and collect up to the minute feedback on rapidly changing NVA positions and operations.

This aircraft attacked targets based on intelligence information regarding troop movements, ammunition storage, POL, riverboat traffic and other assets in the areas near to and above the DMZ. There being no existing provision under the Rules of Engagement for such a unique aircraft operating alone, Chico operated administratively as a Stormy Fast FAC, which was one callsign of then-existing F-4 high-speed FACs at Da Nang.* Under the ROE, this allowed Chico to roam alone and unescorted. HQ 7AF assigned the callsign "Chico" for two reasons: First, it was an established FAC callsign (in keeping with the FAC persona). Secondly, the callsign was no longer in use, so there would be no confusion with real FACs performing controller duties. Accordingly, the Chico name alerted airborne FACs that a special F-4 was available.

After consulting with armament technicians, and subsequent approval for the unique mission from HQ 7AF, an F-4E-37-MC (68-339) belonging to the 421st TFS Black Widows was fitted with SUU-23/A gun pods on the outboard pylons; a pair of Navy Mk 20 Rockeye II Cluster Bombs on each inboard station; one AN/ALQ-71 ECM pod carried in the right front missile bay; two AIM-7 Sparrow radar missiles in the aft wells; and one 600-gallon centerline drop tank. The USN Mk 20 munition was readily available at Da Nang from the Marine Corps F-4 contingent deployed there, and was selected because it was deemed the best weapon for tank, boat, and ammunition dump attacks. It also provided more reliable coverage for highly transient targets such as trucks and missile transports than the usual Air Force Mk 82 Snakeye 500 lb. bombs or Napalm canisters. I believe, and the body of evidence suggests, that Chico was likely the only USAF Phantom to employ Mk 20 Rockeye IIs in Vietnam. The SUU-23/A gun pod, an improvement of the SUU-16/A Ram Air Turbine driven pod, had been in use with the Gunfighters since the late 1960s. The Chico loadout was easily reconfigured so the aircraft could be used for normal daily strike missions.

Col. Pewitt flew this Phantom frequently from April to June 1972. In fact, there were only five pilots who flew 68-339 in her Chico configuration: Col. Pewitt; Lt Col Al LaGrou, 366 TFW Stan/Eval Chief; Capt. Jack G. Merrell, Jr., 366 TFW Command Post, and supplier of these five names; Col. George W. Rutter, 366 TFW Wing Commander; and a Brigadier General from Saigon (HQ MACV), who came up to Da Nang for a visit and one Chico mission. In June, the Wing moved to Takhli RTAB, Thailand, and, due to the distances involved, it was no longer practical to operate the relatively short ranged/short notice Chico the Gunfighter. The aircraft was utilized with devastating success in its intended purpose, but remained the only USAF F-4 operated in this configuration and mission. She was truly a special aircraft. The accompanying painting depicts a mission flown on 21 May 1972 in the Ashau River Valley just below the DMZ. Col. Pewitt and his WSO Lt. David "Bubba" Craighead earned their nomination for the Silver Star medal this day for successful repeated gun-strafe attacks on a very heavily armed enemy site pinning down friendly troops.

*There were a total of three F-4 Fast FAC callsigns in 1972, all with the 366 TFW at Da Nang: Chico, the subject of my painting (there was only one aircraft, F-4E 68-339, which operated as Chico), and the two regular high-speed FAC groups, Stormy and Gunsmoke. The all out North Vietnamese Easter invasions on three fronts into South Vietnam called for radical changes to the traditional way FAC operations were conducted up to that time. Now the enemy was pouring tremendous numbers of troops, AAA guns and SAMs, the latter including the SA-2 radar guided missile and the brand new SA-7 heat-seeker, into the region encompassing the DMZ and the northern sectors of Military Region I, in which Da Nang was located. With all this enemy firepower, it became necessary for Fast FACs to sustain speeds of at least 400-450 knots IAS at the very low altitudes they were forced to operate lest they come back with big holes! The Chico concept was but one 366 TFW innovation at this critical time. Chico complimented the Strike Lead tactics Stormy and Gunsmoke FACs were employing. Strike Lead meant that a Stormy or Gunsmoke FAC (flown by a seasoned crew) would take off with a bombed up F-4 on his wing, and together they would go hunting. The FAC, or Strike Lead, would mark the target with smoke rockets (and sometimes by strafing the target with his internal cannon, the rising dust marking the target), and while his wingman immediately attacked the fresh target, the FAC would move ahead to another hot area.

>> Wade Meyers Painting titled "Chico the Gunfighter"
Was completed in 1999 and is in the collection of Col. James D. Pewitt, USAF (Ret). The painting has been featured in Smoke Trails, Flight Journal, Combat Aircraft, Ghost Wings, and FineScale Modeler magazines. 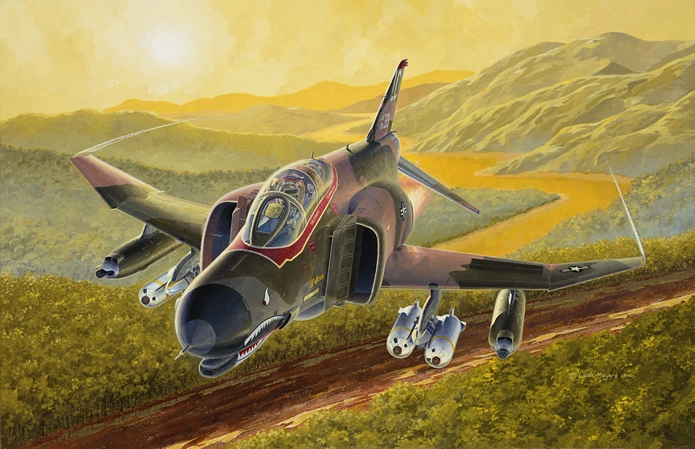 The copyrighted article and painting above were posted with the approval of the Author and Artist, Wade Meyers. They may not be copied or reproduced without his express written consent.