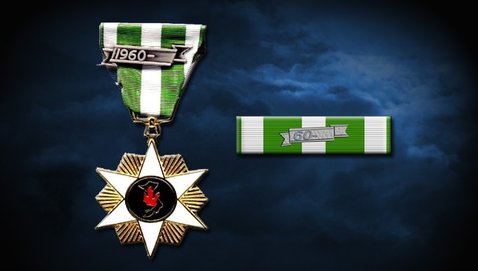 Background
This medal is awarded to members of the Armed Forces of the United States who: Medal Description
The medal is gold-plated with two stars, one overlaid on the other, each star composed of six points. The stars' points above are white enameled in relief with gold border. The stars' points underneath are carved in relief, gold-plated, with many small brass angles directed toward the medal's center. The inside of the frame is green with the outline of the Vietnamese country gold-plated and a red flame with three rays upright in the center. On the reverse are the words Vietnam Campaign Medal.

Ribbon Description
The ribbon is edged with green stripes, and alternate green and white stripes with a white center.

Authorized Device
A rectangular, silver-plated medal device on the suspension ribbon denotes the period of war (for example 1960 - ). A similar but smaller device with the last two digits of the inclusive years of the war, 60 -, is worn on the ribbon bar.