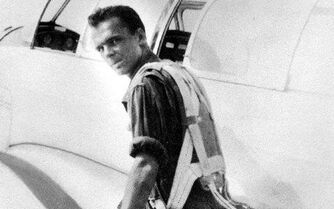 (This identification was initially published May 22, 2019.)

In 1947, based on information provided by a French citizen, the American Graves Registration Command (AGRC) investigated a crash site near the village of Moon-sur-Elle that was possibly associated with McGowan’s loss. An AGRC investigator traveled to the site and learned from witnesses that the aircraft burned for more than a full day after impact and it had been embedded deeply into the ground. An AGRC team removed wreckage from the impact crater but failed to locate McGowan’s remains. As a result, on Dec. 23, 1947, his remains were declared non-recoverable.

In 2010, a team from the Joint POW/MIA Accounting Command (JPAC, a predecessor to DPAA) travelled to Moon-sur-Elle to interview witnesses and survey the crash site. During the survey, the team found numerous pieces of aircraft debris and recommended the site for excavation.

In July and August 2018, a team from the St. Mary’s University Forensic Aviation Archaeological Field School, located in Halifax, Nova Scotia, excavated the site at Moon-sur-Elle, under a partnership agreement with DPAA. The team recovered possible osseous material. The remains were sent to the DPAA laboratory for analysis.

To identify McGowan’s remains, scientists from DPAA used dental and anthropological analysis, as well as circumstantial and material evidence.

DPAA is grateful to the government and people of France, especially the village of Moon-sur-Elle, as well as St. Mary’s University Forensic Aviation Archaeological Field School for their partnership in this mission.

Of the 16 million Americans who served in World War II, more than 400,000 died during the war. Currently, there are 72,639 service members still unaccounted for from World War II with approximately 30,000 assessed as possibly recoverable. McGowan’s name is recorded on the Tablets of the Missing at the Normandy American Cemetery, an American Battle Monuments Commission site in Colleville-sur-Mer, France, along with the others missing from WWII. A rosette will be placed next to his name to indicate he has been accounted for.

McGowan will be buried June 26, 2020, at the Normandy American Cemetery in France.

For additional information on the Defense Department’s mission to account for Americans who went missing while serving our country, visit the DPAA website at www.dpaa.mil, or find us on social media at www.facebook.com/dodpaa,
​or call (703) 699-1420/1169.
Defense POW/MIA Accounting Agency report