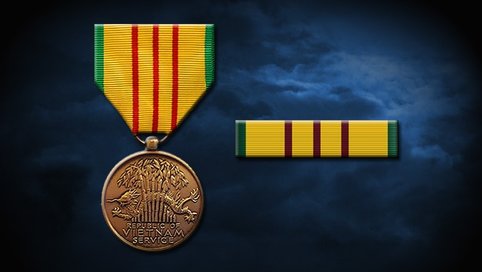 Background
Created by Executive Order 11213, July 8, 1965.  It is awarded to all service members of the Armed Forces who between July 4, 1965 and March 28, 1973, served in the following areas of Southeast Asia:  in Vietnam and the contiguous waters and airspace; in Thailand, Laos, or Cambodia or the airspace thereof and in the direct support of military operations in Vietnam.

Personnel previously awarded the Armed Forces Expeditionary Medal for service in Vietnam between July 1958 and July 1965, may, upon request, exchange that medal for the Vietnam Service Medal (pictured below); however, no one is authorized to wear both medals solely for services in Vietnam.

Criteria
There were 17 different campaign periods, but the first, which was called the Vietnam Advisory Campaign, covered the period from March 15, 1962 to March 7, 1964. During this time there were never more than a few thousand U.S. troops involved in Vietnam.

Note: Asterisk (*) indicates the effective eligibility date for the VSM which began 4 July 1965, however the entire period for the Vietnam Defense Campaign is 8 March 1965 - 24 December 1965.

Medal Description
The medal was designed by Thomas H. Jones, a sculptor and former employee of the Institute of Heraldy, U.S. Army.  Centered on the obverse of the medal is the figure of a dragon, behind a grove of bamboo trees.  Below this design is the inscription "Republic of Vietnam Service."  On the reverse of the medal is a cross-bow (the ancient weapon of Vietnam), surmounted by a lighted torch.  Below this, along the outer edge are the words "United States of America" in raised letters.