In February 1965, while at Holloman AFB, New Mexico, the wing began converting to the new F-4C Phantom II. Later that year, the wing sent its first squadron to the Republic of Vietnam. The 390th Fighter Squadron was deployed to Da Nang Air Base (6252d Tactical Wing) in October 1965, and the 391st went to Cam Ranh Bay Air Base (12th Tactical Fighter Wing) in January 1966. In March 1966, HQ 366th Tactical Fighter Wing, the 389th TFS and various support units of the wing entered the conflict and were reassigned to Phan Rang Air Base, Republic of Vietnam as the base host organization. The 366th arrived at Phan Rang Air Base in March 1966. It was an air base dating back to World War II, used by the Japanese and French. To accommodate the expanding Vietnam War, Phan Rang was expanded by the USAF in 1966 to accommodate both American and South Vietnamese fighter and helicopter units. The 366th was the first permanent USAF organization to be stationed at the base. The wing was composed of a mixture of F-100 Super Sabre and F-4C Phantom II squadrons, deployed from several Tactical Air Command wings:
Missions flown by the 366th TFW consisted generally of two types, MiG-CAP patrols to protect strike aircraft from attack by marauding North Vietnamese fighters and fighter-bomber strikes carried out with iron bombs against ground targets. The MiG patrols and attacks in North Vietnam were taken over by the F-4s and F-105s based in Thailand, which could carry a larger bomb load further and faster. In addition, the F-105 was built to take the extreme structural loads of low-level, high-speed flight, whereas the F-100 was not. Consequently the F-100D fighter bombers generally operated only in South Vietnam where the F-100 turned out to be a very effective ground support aircraft, and beat back many enemy attacks. In October 1966, the F-100-equipped 612th Tactical Fighter Squadron was activated at Phan Rang, composed of former Colorado Air National Guard aircraft which had deployed to Japan and were sent as additional aircraft to Vietnam when their deployment ended. Logistical difficulties in supporting both F-100 and F-4 aircraft at the same base led to the decision to move the 389th TFS to Da Nang Air Base, where F-4Cs were already stationed, and to make Phan Rang an all F-100 base. As former 366th TFW squadrons were at Da Nang (390th, 480th) already, it was decided to perform a name-only reassignment and move the 366th TFW to Da Nang Air Base as the host unit, and reassign the 35th Tactical Fighter Wing at Da Nang to Phan Rang to become the host unit. This realignment was effective on 1 October 1966 in an administrative change, with no personnel reassignments. With 366th TFW move to Da Nang AB, Republic of Vietnam it became the host unit at the larger, sprawling base that accommodated Army, Navy, Marine and Air Force units. The squadrons initially assigned to the wing at Da Nang were:
In addition to the F-4 squadrons, the 64th Fighter-Interceptor Squadron from Clark Air Base, Philippines rotated F-102 Delta Dagger interceptors to the base from Clark, providing air defense of the facility from any North Vietnamese MiGs. The 64th was actually an Air Defense Command unit from Paine Field, Washington which had been deployed to Clark to provide air defense over several major USAF bases in South Vietnam. 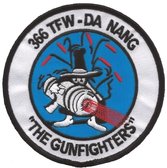 In the early days at Da Nang, pilots were frustrated that they were missing opportunities to shoot down enemy MiGs because the F-4C lacked a cannon and its missiles were ineffective at short ranges. So wing maintainers and aircrews modified the mounting of an external 20-millimeter Gatling gun pod on the F-4Cs used for ground attack for use in air-to-air combat, and in less than a month, starting on May 14, 1967, the wing’s pilots had scored four MiG kills. The gun pod innovation and the MiG kills that followed earned the wing the nickname it carries today, the “Gunfighters.” During this period, the wing earned a Presidential Unit Citation for shooting down 11 enemy aircraft in a six-week period and other combat actions..
It should be noted that not all the action was in the air. Starting with a Viet Cong rocket attack in February 1967 followed by similar attacks in July and September of that year and with increasing frequency thereafter, several ground personnel were killed and injured. The number of enemy attacks throughout the remainder of the conflict earned Da Nang Air Base its well-deserved nickname: "Rocket City".

By May 1968, the wing had upgraded to the F-4D aircraft, and then in 1969, two squadrons of F-4E's joined the wing. After this, the F-4D's assumed forward air control duties, while the more advanced F-4E's concentrated on aircraft escort duties and conducted ground attack missions. By November 1971, the 366th was the only United States tactical fighter wing still stationed in Vietnam. Beginning in May 1972, the forces of the USAF were drawn down at Da Nang. On 30 June 1972, the 366th TFW was deactivated at Da Nang Air Base, being reactivated at Takhli Royal Thai Air Force Base, Thailand the same day. At Takhli, the 366th took over host unit responsibilities from the 49th Tactical Fighter Wing, which had deployed from Holloman Air Force Base in early May 1972 in response to the 1972 North Vietnamese Easter Offensive and invasion of South Vietnam by its regular armed forces. The assignment to Takhli was a name-only reassignment, as the wing consisted of three deployed Holloman F-4D squadrons (7th, 8th and 9th TFS), and two F-4E squadrons (4th, 421st) which were reassigned from Da Nang after the base in South Vietnam was closed. The 366th TFW was deactivated in place on 31 October 1972, being reactivated the same day without personnel or equipment at Mountain Home Air Force Base, Idaho. During it's final months in Southeast Asia before returning to the United States the wing earned it's second Presidential Unit Citation.

Upon the wing's returned to the United States in October 1972, Captain Lance P. Sijan, a 366th pilot shot down in 1967, was posthumously awarded the Medal of Honor for his actions as a prisoner of war.